In order to maintain a healthy and competitive karting series, Atlanta Motorsports Park reserves the right to update and/or modify its 2016 Supplemental Rulebook for the Kart Championship Series at any time. The decisions below are made based off both the voiced concerns of our racers as well as what we feel is the best direction to take our championship.

In order to provide some clarity for our racers on our procedures and rules for race starts, the Team at Atlanta Motorsports Park has updated our 2016 AMP Kart Championship Series Supplemental Rulebook. Three new lines were added to the document, all pertaining to race starts. Section 2.e.i.2. goes over the World Karting Association’s long-time 90-second rule, which states that as soon as the command has been given to clear the grid all karts have 90 seconds to enter the track. As soon as those 90 seconds have expired, the grid steward will close off the grid exit and the drivers on-track will prepare to start the race.

Section 2.e.i.3. goes over the number of start attempts that are allotted for each race. A grand total of just two attempts to take the green flag are given, meaning that one false start is possible. On the second attempt to take the green, however, the green flag will be given automatically and Team AMP will utilize its private camera system to monitor and assess potential penalties.

Section 2.e.i.4. pertains to any kart that may lose power or stall while out on track prior to the green flag being waved to start a race. As soon as the kart stalls, a corner marshall will respond to assist the driver in attempting to restart the kart. The field will be waved through the cut-through at Turn 1 just as noted in the daily drivers’ meetings, but if the kart cannot be restarted by the time the field makes a full circuit around the shortened course, the start will no longer be held off. For any and all Local Option Yamaha KT100 classes or karts that need external starters to restart the engine, this rule will not apply and karts in these classes will simply be moved to a safe location once they stall out.

Keeping with the theme of providing clarity, Atlanta Motorsports Park now has begun to structure the placement of the transponders on karts. Section 1.e. in the supplemental rulebook now clearly states that the transponder must be securely mounted at no less than 9 inches behind the center of the kingpin on the kart. We at AMP believe that this clarification will help us continue to strive for the most level-playing field while still making it easy for drivers by not mandating a specific spot on the kart for the transponder to be mounted.

This way, if other series or tracks designate a specific place on the kart for a transponder to be placed, all the driver has to do to compete at AMP is ensure that the transponder is more than 9″ behind the center of the kingpin on the side of the kart that it is on. 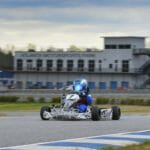