AMP club member Steve Bush was recently asked if he could lend the sound of his 1961 Ferrari to a top secret, major film project. Not being one to shy away from a good time, Steve said yes. It was later revealed that the movie needing period specific engine noise was the upcoming Ford v Ferrari staring Matt Damon and Christian Bale.

Steve enjoys his car collection and while not a lot of people have seen his 1961 Ferrari, almost everyone has now heard it. Microphones were strapped all over the car to capture sound from every possible angle. They almost solely used his car for all Ferrari sounds in the movie.

The entire process was incredibly fun for Steve, and now with his Hollywood connections, is working with other members at AMP to have their unique cars sounds cataloged for future use.

WSB filmed the segment above in anticipation of Oscar night and aired it shortly after the ceremony ended. Below you will find another segments of the process the sound editors went through in creating such captivating audio. 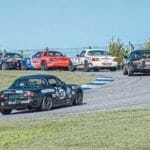