After qualifying on the pole position for Race 1, Keith Williamson had to fend off both Jose Garcia and Jason Bergstrom who refused to give the polesitter an inch of separation for the entirety of the 20-minute race.

The three drivers quickly separated themselves from the rest of the pack and when they weren’t racing side-by-side, they were bumper-to-bumper seemingly attached to one another as they snaked their way down the straightaways.

With no one gaining any separation, the race to the line would determine the winner. As the checkered flag creeped into view, Garcia made his move around Williamson but couldn’t complete the pass as Williamson was able to keep his nose out in front to take the win ahead of Garcia.

Bergstrom finished third only 2.656 seconds behind the two leaders while fourth-place finisher Bill Miller was 28.718 seconds off the race winner’s pace.

Undaunted by his near miss in Race 1, Garcia claimed the pole position ahead of Williamson and Bergstrom for Race 2.

The second race looked like it would set up to be a carbon copy of the first after Williamson almost made the pass around Garcia on Lap 2 ducking towards the inside of Turn 1, but Williamson wasn’t able to complete the pass with Garcia pulling away from Williamson ahead of the carousel at the top of the track.

Unfortunately for Williamson, that was the closest he would come to taking the lead as Garcia was motivated to avoid a repeat of Race 1, steadily increasing his lead over Williamson to keep the Race 1 winner just far enough away from attempting the same last lap pass at the start/finish line that Garcia failed to complete.

By the time the checkered flag waived, Garcia had built a three-second lead to complete the wire-to-wire win finishing the race in a considerably less dramatic fashion than what took place in Race 1 which suited Garcia just fine.

Garcia’s celebration would be short-lived, however, as despite being the runner-up in Race 2, Williamson was able to use the draft on Garcia to post the fastest lap time (1:36.993) to capture the day’s overall Spec Miata class win via the fastest lap tiebreaker since both racers ended the afternoon with a first and second place finish, as well as one pole position apiece to tie in points.

Despite being in the thick of things in Race 1, Bergstrom spun out on Lap 3 in Race 2 trying to make a move out of the third position. While Bergstrom took himself out of contention for the race win, he made a nice recovery to remain in fifth place and worked his way up to fourth to clinch the final overall podium spot.

Miller was forced to retire from Race 2 after what looked like a braking issue started to cause his car to smoke while he was running in the fourth position. In spite of the Race 2 DNF, Miller was still able to finish fourth overall on the day thanks to his strong Race 1 result.

Scott Carlisle was able to recover from a disappointing Race 1 finish to capture third place in Race 2. 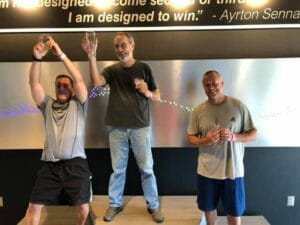 With Ty Young sitting this one out and Joey Townsend uncharacteristically struggling to find speed, the Spec E30 class was ready to crown a new winner.

Jeff Tyrrell, Jeremy Buckingham and Walter Araya were all in contention to capture their first win of the season and all three sure put up a fight for that elusive top podium spot.

Tyrrell took the pole position for Race 1 and was able to maintain his advantage throughout the race although not by much.

Buckingham was able to get around Araya and put the pressure on Tyrrell to close the finishing gap to just a 1.2 second margin, but Tyrrell was able to hit all his marks to keep Buckingham at bay.

After taking Race 1, Tyrrell was in prime position to claim the overall win. That all changed following qualifications for Race 2 after Araya took the pole position followed by Buckingham.

That uncertainty lasted all off one turn as Tyrrell was able to make the pass around Buckingham at the start. All Tyrrell had to do now was maintain his spot on the track and the next spot he would be in would be the spot at the top of the Spec E30 class podium.

With the overall win on the line, Tyrrell maintained his position and while he provided some pressure on Araya, he smartly avoided taking any chances. If Araya slipped up, Tyrrell was ready to pounce but Tyrrell wasn’t going to force the issue.

Araya didn’t slip up and completed the wire-to-wire win, but Tyrrell did what he needed to do to capture the overall win by holding off Buckingham for second place. 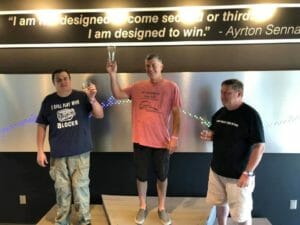 No one could muster much of a challenge for Franklin Futrelle on Sunday in the Downforce class as Futrelle swept the competition to win both races by a significant margin.

The only hiccup to Futrelle’s perfect day was losing out on the Race 1 pole position to Jack Rambo, although that’s hardly a knock on Futrelle as he was racing in a different class and despite Rambo having the superior car on paper, Futrelle fell short of the pole by just 0.066 seconds.

Once the green flag flew, however, Futrelle showed just how dialed in his SR1 Radical car was pacing the field to finish over 25 seconds ahead of Jon Brunot. Tim Stafford finished third driving an SR3 Radical and Rambo finished fourth, over 48 seconds behind Futrelle.

Race 2 started this time with Futrelle on the pole followed by Brunot and that was the order they ran for the entire 20 minutes. Brunot wasn’t able to provide much of a challenge although he did reduce Futrelle’s margin of victory to just over seven seconds and while still a significant margin is considerably less than the previous 25-second margin of victory earlier in the day.

Futrelle and Brunot were able to build close to a 20-second gap on third-place Rambo until Rambo spun out in Turn 1 on the second-to-last lap to finish with a disappointing DNF.

Michael Gatto took advantage of Rambo’s spin to finish in third place which also clinched Gatto the third-place overall spot on the podium behind Futrelle and Brunot in the SR1 Radical Downforce class.

Adler went back-and-forth with Gatto on the track for the entirety of Race 2 but perhaps pushing the car a little too hard ran out of gas on the last lap for his second DNF on the day. Stafford and Layman finished fourth and fifth respectively to round out the cars finishing on the lead lap. 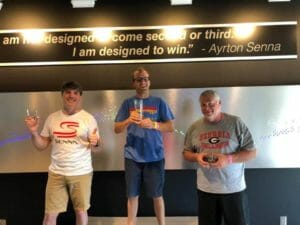 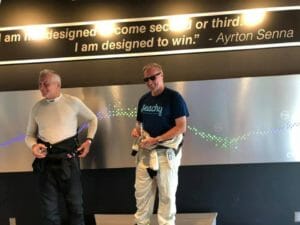 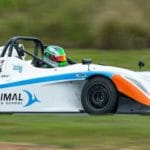