In a rarity for the Spec Miata class, Jason Bergstrom captured the overall class win on Sunday without the need for a fastest lap tiebreaker with victories in both races to sweep the day’s activities at Atlanta Motorsports Park.

Bergstrom’s efforts were aided by the absence of previous overall race day winner Keith Williamson and the early retirement of contender Jose Garcia, but that doesn’t mean the day was easy for Bergstrom.

Following a Race 1 win and earning the pole position for Race 2, it did look like it would be smooth sailing for Bergstrom to the top of the podium. That was until Rodney Earwood made an ambitious move from the fifth position at the start of Race 2.

With the waving of the green flag, Earwood swung inside on the double-file start making a charge to the front forcing him and the leaders to go three-wide into Turn 1. Earwood stuck his nose inside of Bergstrom but couldn’t control the momentum he built up and spun out taking Bergstrom and other front-row starter, James Kaney, with him.

In the midst of all the dust, the pole-sitter found himself looking into the face of oncoming traffic but luckily for him, the other drivers were able to avoid any further contact and Bergstrom managed to get his car swung back around in the right direction.

The race continued with Earwood getting black flagged for his actions and Bergstrom now having to spend the 20-minute race battling himself up through the field or else his Race 1 win would all be for naught.

Jarrett Jones and Ann Morey were able to escape the incident inheriting the race lead followed by Bill Miller and then Bergstrom. Kaney, who perhaps suffered the worst from the incident in regards to track position, went from second to second-from-last after being pushed off the track into the sand in Turn 1 and Steve Denton found himself in the rear as the race settled back down.

This would be a challenge Bergstrom has yet to face in the Spec Miata season, but you wouldn’t know it the way he calmly and quickly made his way back up through the field. By Lap 3, Bergstrom had passed both Miller and Morey to move himself back into second position.

Now all in his way for a Sunday sweep was Jones. Seemingly motivated by the crash, Bergstrom was being clocked lapping nearly two seconds quicker than the leader. On Lap 6, Bergstrom had closed the gap on Jones to just two seconds and as the two cars came down the front stretch to complete Lap 7, Bergstrom made the pass around Jones to recapture the lead and he would not look back.

After being involved in the Race 2 incident alongside Bergstrom, Kaney also made a charge to the front to try and salvage an overall podium finish. After finishing runner-up in Race 1 ahead of Jones, Kaney needed at least a third-place finish in Race 2 if he wanted a chance at the second step on the podium.

Kaney worked his way around Morey into the fourth position where he spent most of the race trying to catch up to Miller. It was Miller followed by Kaney for a full eight laps until they found themselves side-by-side on the track as Kaney had finally closed the gap and the two drivers took the white flag. Kaney was able to complete the pass into third place on the final lap setting up a tiebreaker scenario with Jones since each driver now had a second- and third-place finish on the day.

It was Kaney, with a fastest lap of 1:35.496, who beat out Jones by 0.383 seconds for second-place overall on the day. Jones finished third with Bergstrom taking the top spot in the Spec Miata class. Fourth-place went to Miller followed by Denton and Morey to round out the rest of the field. 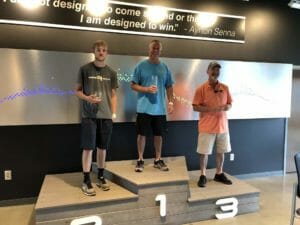 Patrick Wilmot sweeps the Downforce class with a combined margin of victory of 0.721 seconds

It was a more relaxed feel in the Downforce class Sunday as overcast conditions kept the number of driver entrants to just five, two in the SR1 Radicals and three in the faster SR1-1 cars. Due to the difference in cars, it was agreed upon that the more powerful SR1-1 cars would start approximately 30 seconds behind the SR1 Radicals which set up an exciting chase scenario producing two of the closest finishes so far in the Downforce class season.

Despite similar starting procedures, both races had different finishing scenarios although both were equally entertaining. Race 1 came down to two SR1-1 cars as Patrick Wilmot beat out Kevin Clifford by a mere 0.562 seconds after fastest-qualifier Jake Bailey was forced to retire mid-race.

Not to be outdone by Race 1, Race 2 started with SR1 Radical cars driven by Michael Gatto and Paul Parker out front with Wilmot and Clifford set up as the chasers. Gatto made quick work of Parker while Wilmot was able to distance himself from Clifford this time around.

The chase was on and the running order was Gatto, Parker, Wilmot and Clifford for the first 13 laps all the while Wilmot was clipping roughly four seconds off of Gatto’s lead with each passing lap.

At Lap 14, Wilmot had gotten around Parker but with just minutes left in the 20-minute race, it was unsure if there would be enough time for Wilmot to catch Gatto.

As the white flag waived on Lap 15, Wilmot was roughly three seconds behind Gatto. According to previous lap times, it looked like Wilmot would in fact be able to catch Gatto but could he pass him?

Gatto was pulling out all the stops to keep the faster Wilmot behind him and as the racers neared the checkered flag, it appeared as if Gatto would be able to accomplish the feat but Wilmot tucked into the draft behind Gatto before making a sling-shot move around the leader as the checkered flag waved to win the race by a remarkably slim 0.159 second margin.

Wilmot joined Bergstrom in the Spec Miata class by sweeping both races on Sunday, but unlike Bergstrom’s over seven second margin of victory each race, Wilmot won both his races by a combined 0.721 seconds.

Towards the back of the pack, Parker was able to hold off the faster car driven by Clifford to win the third/fourth-place battle by just over a second to complete a fun day in the Downforce class. Sharing the overall podium with Wilmot was Gatto in second-place and Clifford in third with Parker finishing just off the steps after a close fourth-place overall finish. 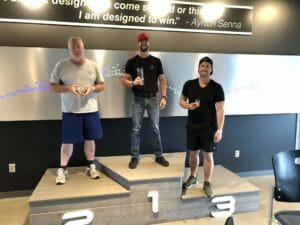