Designed by Formula One track architect Herman Tilke, the AMP track consists of 16 turns and 98 feet of elevation changes throughout the course. It has become a go-to test track for many Pro Mazda, USF2000 Championship and Pirelli World Challenge teams since 2014 when it began providing the track as a testing & tuning location for teams. 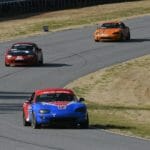