Everyone has that one tangible item that signifies success and tells them that they have made it, and for Shark Tank’s Robert Herjavec that thing is fast cars. He fell in love with cars at a young age after immigrating to Canada from Croatia and seeing his first Ferrari. That passion for all things automotive was a recurring theme during his talk and Q&A at Atlanta Motorsports Park on Nov. 3, 2017.  Guests were able to ask the Herjavec Group CEO and former Ferrari Challenge competitor questions about business, technology, racing and even reality television during a catered brunch with a view of AMP’s two mile road course.

Herjavec drew many parallels between business and racing over the course of the morning. “One of the best things about racing is that it humbles you. There are no shortcuts,” Herjavec said. He believes a big part of his company’s success is due to their willingness to adopt new strategies and processes as the technology industry continues to evolve. “[Business] is like racing, when you see an opportunity to pass you have to do it,” Herjavec said.

The event was moderated by Johnny O’Connell, a three-time American Le Mans Series champion and four-time class winner at the 24 Hours of Le Mans, driving for Team Cadillac in the Pirelli World Challenge.  Following the brunch, guests were able to experience an action packed day behind the wheel including grand pix karting, training on AMP’s skid pad and ice hill and open track time on the road course. 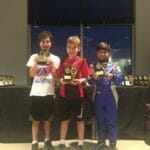 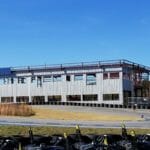