Famed Formula One driver Ayrton Senna once referred to karting as the “purest form of motorsport,” and many successful racers have started their careers out on a karting circuit. Karting is safe and family friendly, but still an incredibly thrilling sport to get into at any age. However, it can seem less accessible than other mainstream sports like baseball or football. That is why Atlanta Motorsports Park strives to be a one stop karting destination for racers of all skill levels, from the casual concession kart racer to the seasoned driver.

Atlanta Motorsports Park offers a variety of ways to get started in competitive kart racing. This March marks the beginning of a new season of racing at Atlanta Motorsports Park. AMP offers monthly race series for both cars and karts, as well as karting leagues and endurance races. Here are a few of the upcoming races at AMP:

Round 1 of the 2018 AMP Kart Championship Series on March 3: The AMP Kart Championship Series nsists of 8 races spread over 8 months, with an on-going point tally that counts toward a series championship. The series holds races on Saturdays with on-track action starting at 8:30 A.M. and running until 5:30 P.M. There are classes available for drivers who want to race their own karts and those who want to race AMP’s concession karts.

Round 1 of the 2018 AMP Car Championship Series on March 4: Atlanta Motorsports Park’s race series is open to both members and guests. The series consists of eight races spread over eight months, with an on-going point tally that counts toward a series championship. The series holds races on Sundays with on-track action starting at 9:00 A.M. It has competitive classes for Spec Miatas, Spec E30, Radical SR1, and Radical SR3.

Round 1 of the 2018 AMP Rental Kart League on March 22: The 2018 Spring Edition of AMP League Night is a six-week season that consists of six individual race days held on Thursday evenings. The league is perfect for anyone looking to get started in karting or experienced kart racers looking to have some fun on a week night. 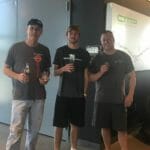