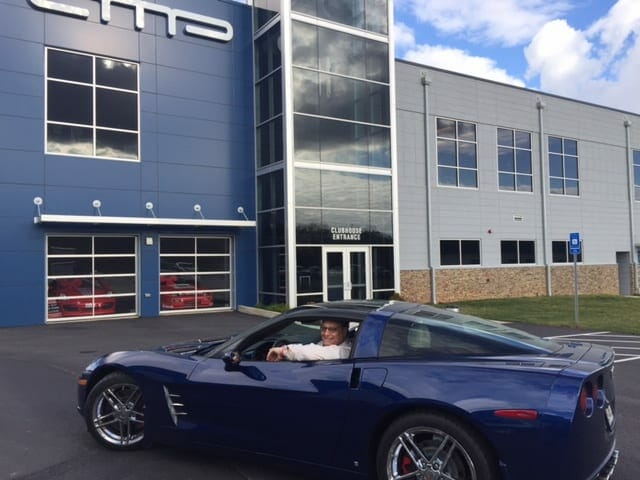 When Bhrett Pizza (pronounced PEE-sah) got his modified hand control Corvette C6, he only had one problem: there was nowhere to drive it fast.

He had made a subconscious promise to himself — a self-admitted irresponsible promise — “every time I take it out, I’m going to do at least 100 miles per hour.” But after winding around the roads near his lake house in Monroe, Georgia, daring police to catch him every time, the mental weight of the risk began to outweigh the exhilaration. He is an attorney, after all.

But then, during a Ferrari Experience event at Atlanta Motorsports Park he took his nephew to, Pizza realized wanting to play wasn’t the problem. He just hadn’t found the right playground. During a subsequent Ferrari+Beretta event at AMP, he drove his Z51-package Corvette on the track and got hooked. Afterwards, he made an immediate decision: “I want to join this club.”

Now, he has become a familiar face around the track at AMP and one of our staunchest sources of praise. As one of the few members who uses an assistive device in their vehicle, he has also shown how there are no excuses for letting life slow you down.

For This Lawyer, Speed Never Loses Its Appeal

Speed has always been something Bhrett craved, even at a young age. He spent his youth driving motorcycles during High School. When he moved from New Jersey to Colorado to attend undergraduate school, he rode his 650 Triumph the entire way and then enjoyed it every chance he got. Winding through the mountain passes and pushing his bike to the limit, Pizza felt in control and at peace.

Despite his penchant for thrill-seeking on mountain roads, Bhrett never had a major accident on his bike. But he did have an accident on a mountainside while skiing, one that left him with a damaged spine and no mobility in his lower extremities. This happened in December of 1980, the day before he was set to take his law school admissions test LSAT.

Rather than let the injury set him back, he used the extra time during hospitalization and rehabilitation to study for his law entrance exam. He even took the exam from his hospital bed, successfully gaining admission. He graduated from Oklahoma City University in 1986 with a J.D., and he only briefly stopped riding before rekindling his love of motorcycles. Except instead of two wheels, these had three.

“I was afraid at first, after the accident,” he told us, “but I got my courage back and began to ride three wheeled bikes.” Bhrett has since owned two Harley-Davidson Tri GlideS and a three-wheeled Honda Goldwing, all of which he enjoyed taking on the open road. He also moved to Marietta, joining a law practice and then starting his own one, which he explains began with “just me and a blue-haired secretary.”

Finding success but still craving a life of speed-infused leisure, Bhrett began to look towards purchasing his first “fast car”: a 2007 Corvette C6 with the Z51 performance package.

2005 was a momentous year for Mr. Pizza. The newly released C6 Corvette was in its second model year and introduced a feature that would make his dream of owning a performance-oriented vehicle more attainable than ever. The 2006 Corvette utilized a unique paddle shifter design that allowed the levers on either side of the steering wheel to shift both up and down. This design was controversial to some, but for someone who needed a hand-control drive system, it was perfect.

A year later, Pizza bought a brand-new 2007 Corvette and had it modified by a Marietta-based company called Handicap Drivers Associates, which has since changed their name to ___.

“Funny aside is that when I got my Corvette in 2007 it took longer than usual for them to install the hand controls,” recounts Pizza. “They had never installed hand controls on a Corvette and all of the technicians were talking about the guy in the wheelchair with a Corvette.”

His assistive device system utilizes a mechanical cam that activates the original pedals that came with the Corvette. By using a hand lever to his left, Bhrett can push it towards the floorboard to accelerate and towards the firewall to brake. Since this action occupies one hand at all times, the unique paddle shift design of the C6 came in handy, allowing him to change gears with just his right hand.

At first, Pizza could only use his Corvette to dream about hitting certain speeds. When no one was looking and he was on a quiet, straight stretch near Marietta or at his lake house in Monroe, he would let the Vette stretch its legs and hit triple digits on the speedometer. Eventually, though, his fear of getting busted as a super-speeder tempered this thrill seeking.

It wasn’t until he brought his Corvette to the track for the first time that Pizza knew what both he and his car had been missing. Waxing mildly philosophical, he recounts one of AMP’s unofficial mottos: “Why have a fast car if you can’t drive it fast?”

Staying Active at the Track and at the Range

Bhrett Pizza is now a regular at the AMP track. When we interviewed him for this piece, we could sense the disappointment in his voice since impending snow and sleet had closed the track for the day. Otherwise, he is here like clockwork as long as his work and membership schedule permit.

“When I started out, I was so green that  I didn’t know the difference between an oval and a Formula One track,” Pizza confesses. While he has since absorbed details like these, he has also realized how much he has to learn.

“There are real challenges in getting better,” Pizza reflects. “You can’t just go out there and be as good as these guys who have been doing it a long time. It’s also not just about going fast with a powerful car. You have to start learning the lines, learning how and when to shift and learning when and where to brake. Initially, it’s frightening, but I’m finally learning to get better.”

Pizza states that there are so many things to be appreciative about regarding AMP. Some of his personal highlights include:

In addition to AMP, Pizza keeps a busy schedule. He is an avid firearm enthusiast and always takes his office staff to “Ladies Night” at Adventure Outdoors. He became addicted to skeet shooting, as well, after helping counsel newly-injured patients at the Shepherd Spinal Center. By taking these patients out and letting them have a blast, literally, he helped show them “You can always go forward; you’re not just going to be relegated to a bed your whole life.”

This push to go forward makes Bhrett Pizza one of our most inspiring members at AMP, not because of his impairment but because his zeal and passion for getting more out of life. As he puts it himself: “We only have so much time to do all this stuff, so we should be going out and doing it!”

As Mr. Pizza’s story shows, AMP is about helping people from all backgrounds and experiences find their passion inside a community environment that enables that passion to flourish. 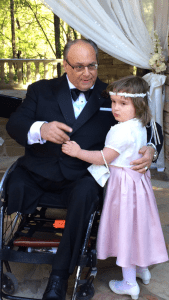 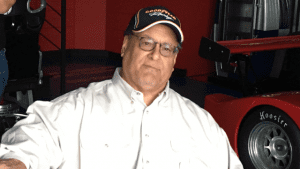 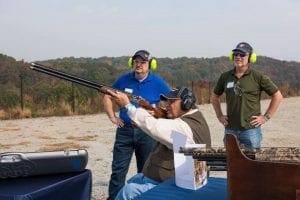