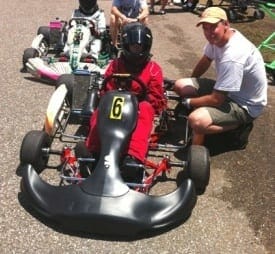 Tell us about the cars you love to drive

Have you ever been trained to drive?

I started racing in SCCA in 2001. I was the 2001 SCCA CFC Regional Champion and Rooky of the Year. In 2002 I raced SCCA Nationals in Formula Continental. In 2003-2004 I raced in the SCCA Pro Cooper Tires Zetec Championship. In 2005 I started Aiken Racing. Our team won the 2005 Cooper Tires Team Championship and the 2005 Driver Championship with Jay Howard who is a current Indy Car driver. We stopped racing after 2005 and now focus on Porter’s Karting.

What do you do for a living?

I have been a Construction Project Manager for HADP Architecture, Inc for 17 Years and I have owned the consulting firm Govwerx, Inc. since 2003.

Where do you live?

I live in Alpharetta, GA

How do you use your membership? Business? Pleasure?

This membership will be used to improve Porter’s driving skills and to maintain my driving skills if I still have any. It’s been a while since I have been behind the wheel.

What I like most about AMP is that it is so convenient to home and the Country Club atmosphere. I look forward to upgrading to a car membership within the next year.

Anything you would like to say to other potential members?

I don’t really have anything to add except that I look forward to seeing AMP develop into a world class facility.